Why Does Frost Form on AC Coils? 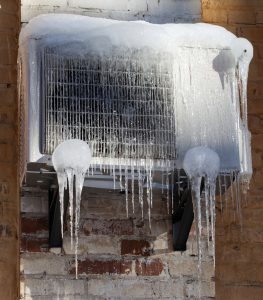 If you’ve ever checked your air conditioner, you may have encountered frost or ice forming on the evaporator coils. Laymen don’t tend to worry about it too much. Since air conditioners are supposed to generate cool air, the presence of frost or ice seems normal. Unfortunately, the truth is much different. Not only does frost on the coils constitute a serious problem, it will only grow worse if you let it.

Why Is It a Problem?

The process of cooling the air is very delicate and can be throw off very easily. Refrigerant enters the coils in liquid form and under a great deal of pressure. There, it shifts back to gaseous form, which pulls heat from the surrounding air. The gaseous refrigerant returns to the start of the cycle to start the process again, which the AC’s fan blows the cool air through the ducts to lower the temperature in your house.

When that process is out of whack, frost or ice will form on the coils, which is problematic in two ways:

Both of those issues force the system to spend more energy on cooling your home, which not only raises your monthly cooling costs, but puts additional strain on the system itself: increasing the risks of a breakdown. Even worse, the trend will accelerate, with more ice forming, which hampers the cooling process further and creates more strain until the entire system will simply shut down.

A number of different things can cause frost to form on the AC coils, including (but not limited to) the following:

It takes proper training and experience to diagnose these issues, which is why you should always call in a professional service to deal with frost on your system. Never try to scrape the frost off. You’ll likely damage the coils – which can be very expensive to replace – and the frost will simply re-form since the core of the problem lies elsewhere.